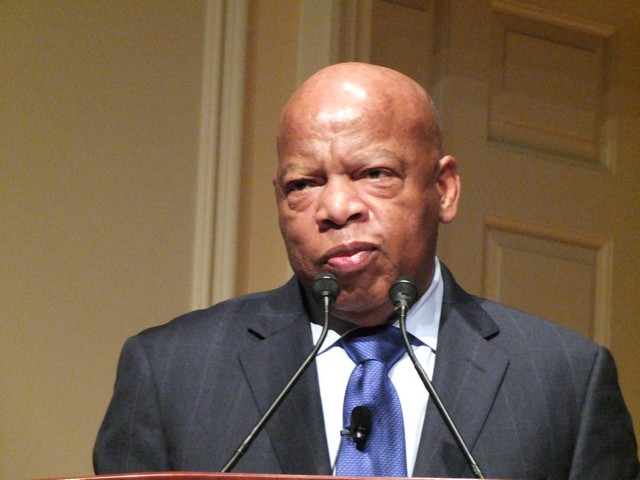 John Lewis (February 21, 1940 - July 17,2020) was the Representative for Georgia’s Fifth Congressional District, serving since November 1986. Born outside of Troy, Alabama, Lewis was inspired at a young age by the civil rights movement surrounding the Montgomery Bus Boycott. In 1961 he volunteered to participate in the Freedom Rides and from 1963 to 1966 was Chairman of the Student Nonviolent Coordinating Committee (SNCC) which he helped form, organizing sit-ins, bus boycotts and nonviolent protests in the fight for voter and racial equality. Dubbed one of the “Big Six” civil rights leaders at the age of 23, he was a keynote speaker at the historic March on Washington. In 1965 he organized among other notable Civil Rights leaders the peaceful protest of over 600 protesters on a March from Selma, Alabama to Montgomery that was halted by Alabama state troopers that became better known as “Bloody Sunday”. Despite more than 40 arrests, physical attacks and serious injuries, John Lewis remained a devoted advocate of the philosophy of nonviolence. Lewis went on to become the Director of Voter Education Project adding nearly four million minorities to voter rolls. John Lewis holds a B.A. in Religion and Philosophy from Fisk University, and is a graduate of the American Baptist Theological Seminary. He has been awarded over 50 honorary degrees from colleges and universities throughout the United States as well as numerous international and national awards, including the Medal of Freedom by President Barack Obama and the only John F. Kennedy “Profile in Courage Award” for Lifetime Achievement ever granted by the John F. Kennedy Library Foundation. He authored Walking With The Wind: A Memoir of the Movement, written with Michel D’Orso and Across That Bridge: Life Lessons and a Vision for Change, written with Brenda Jones. Most recently he is co-author of the #1 New York Times bestselling graphic novel memoir trilogy, MARCH: Book One, MARCH: Book Two and MARCH: Book Three, written with Andrew Aydin and illustrated by Nate Powell.